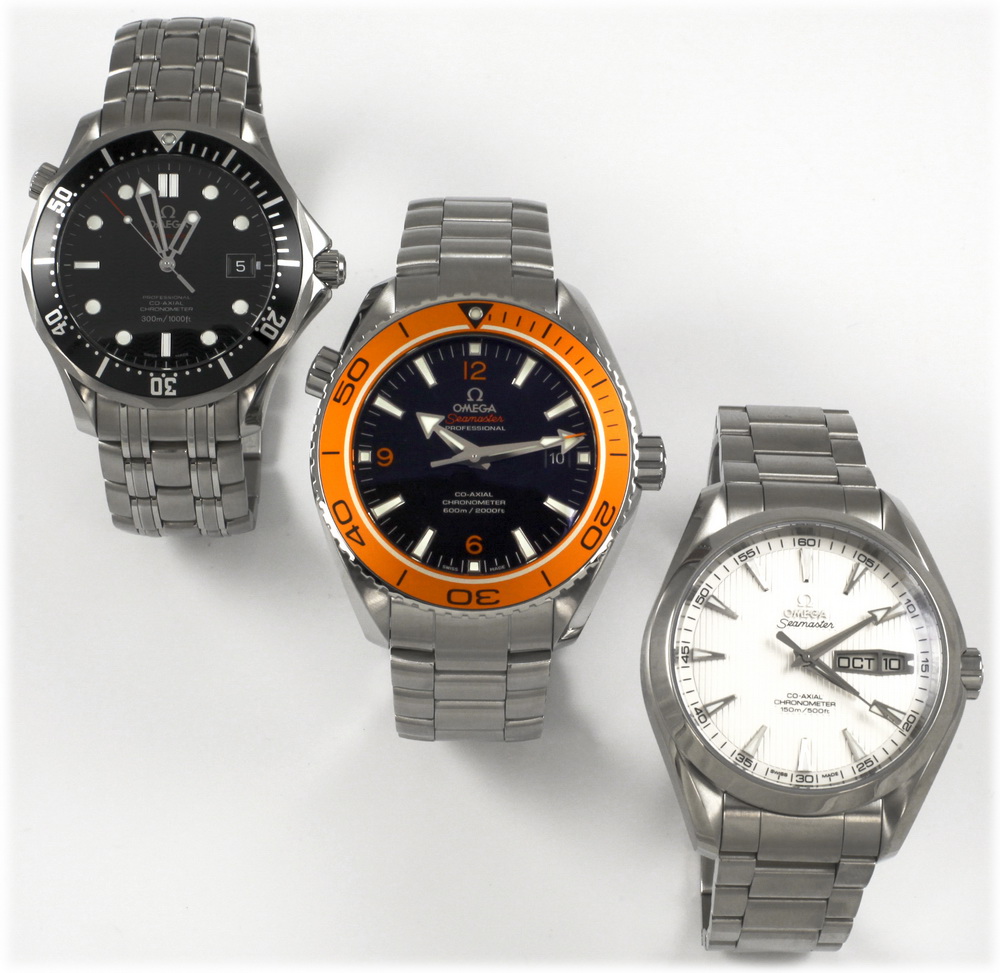 The Omega Seamaster was originally introduced in 1947. Today’s Aqua Terra bears the closest resemblance to the original with a dressier (yet, sporty) look, but it has still evolved a bit since then. In this post, we will discuss the 3 main Seamaster lines of today (since 1994 more specifically): The Seamaster Professional, the Seamaster Planet Ocean, and the Seamaster Aqua Terra. All Seamaster watches feature a screw-down crown.

The most well-known series is the Seamaster Professional, which was introduced in 1994. It first became well-known to the public in the James Bond movie Golden Eye in 1995. The Seamaster Pro line has a water resistance rating to 300 meters.

All of the standard (time/date) and chronograph models include the helium escape valve at 10′. The GMT does not include the escape valve, but still maintains the 300m rating. The most common standard automatic versions use an Omega modified ETA 2892. When introduced, it used the Omega 1109, but in 1996 Omega replaced it with the Omega 1120. The 1109 was updated to the 1120 to fix a winding flaw and add a rhodium finish to certain parts for extra durability. In 2006, Omega started fitting Seamaster Pros with their improved Co-Axial Omega 2500 (also based on the ETA 2892). Each Seamaster Pro also sports a unidirectional rotating bezel, originally with an aluminum insert. In 2012 Omega started releasing the Pro with a ceramic insert. 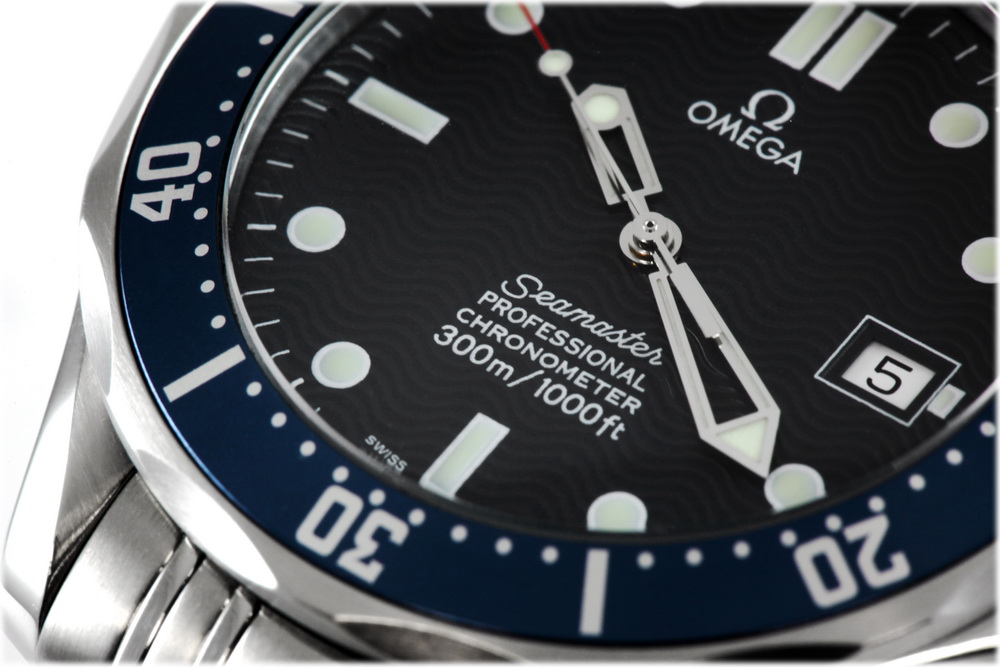 Until the last couple of years, most featured a wave pattern on the dial. Most models have either a black or blue dial. Less common are white dial, electric blue, blue-gray, and the silver / white chronograph. The 41mm and 36mm Pro’s is offered with the choice of an automatic or quartz movement. One can quickly figure which movement it has by the presence of “Chronometer” on the dial of the automatics.

The Seamaster Pro is offered in 4 sizes, with the 41mm wide, 13mm thick case being the most common and popular by far. The Chronograph is 42mm wide, 16mm thick. At the time of its introduction it was one of the larger watches you could buy. The mid-size measures in at 36mm wide, 12mm thick. The scarce ladies measures 28mm wide, 10mm thick and is only fitted with a quartz movement.

Before continuing to the Planet Ocean, some notes on the helium escape valve at 10′. Most people will never use this feature. It is truly designed for professional use in pressurized chambers. The gases in diving bells can contain helium. Helium atoms are so tiny they can make their way inside the watch. When emerging from the water, the pressure differences between the gases and external environment can damage the watch. As its name so logically states, the valve lets the helium escape. For the rest of us, it’s just an aesthetic. Or, for the person who fidgets, it’s a crown to unscrew, and screw, and unscrew, and screw.. This action does not damage the watch or disable its professional function. That said, you want to keep it closed to prevent dust & water from entering the watch. 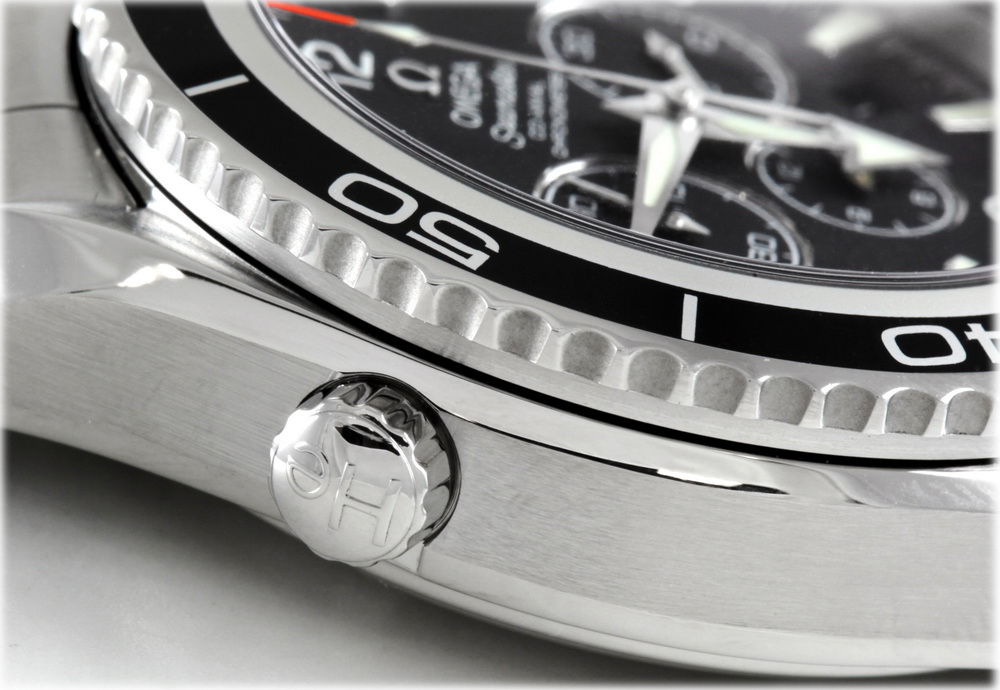 The Planet Ocean was introduced in 2003 and had the Omega 2500 Co-Axial movement from the start. Omega beefed up the case significantly to enable the Planet Ocean’s to go even deeper, with a water resistance rating of 600 meters. The Planet Ocean (and the Aqua Terra line) are the first Seamasters to get the latest features, such as: ceramic and LiquidMetal bezels, the Si 14 silicon balance spring, and most recently the in-house Omega 8500 caliber. Until 2012, the PO was only offered with a black dial. In the past couple of years, Omega added blue and white options. The Planet Ocean is only offered with automatic movements. 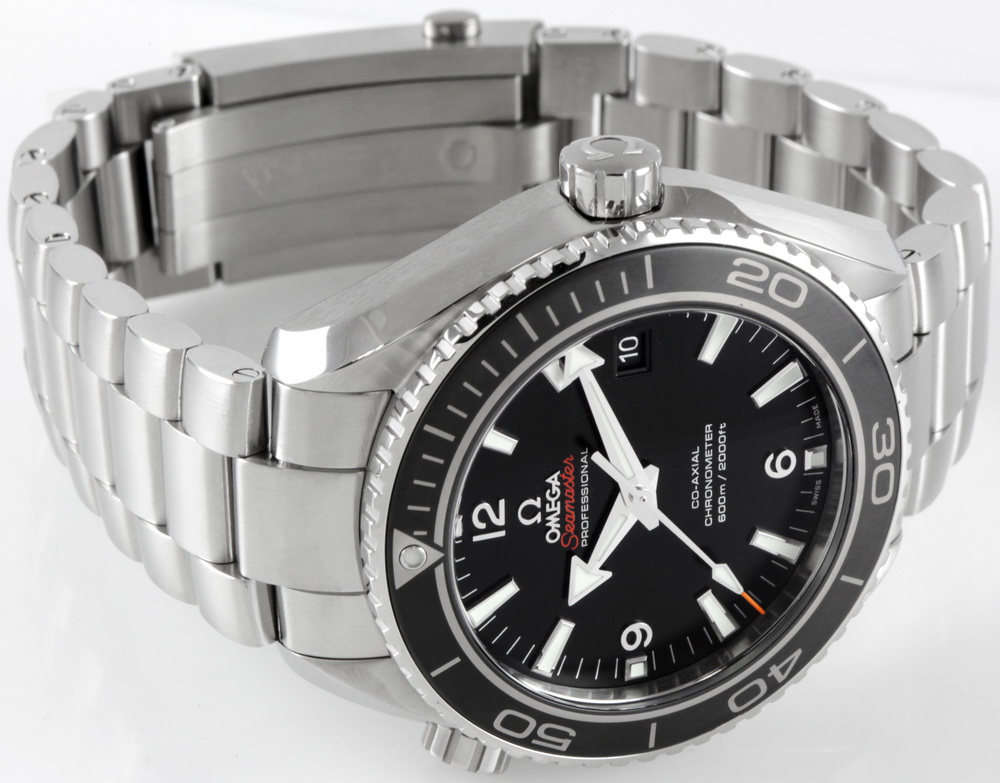 The Omega Planet Ocean is offered in 4 sizes. The smallest being 42mm wide, 14mm thick. Next up is the Planet Ocean Big Size (previously labeled XL) at 45.5mm wide, 17mm thick. Finishing up the line is the Chronograph at 46mm wide, 18mm thick! The newest size option is 37.5mm is marketed to be worn by women and was only recently introduced. We have yet to personally see one in this smaller size.

Last up in the line up is the Aqua Terra line which Omega seems to treat as their sandbox for new styles and variations. Its direct predecessor, the Seamaster 120 had a much simpler history. The Seamaster 120 had a (surprise, surprise) water resistance to 120m and was produced from 1994 to 2003. The 120 primarily came in a ladies 26mm, or gents 36mm case, with the exception of the unique 38mm Seamaster 120 Digital which had a multi-function movement with functions similar to the Breitling Aerospace. 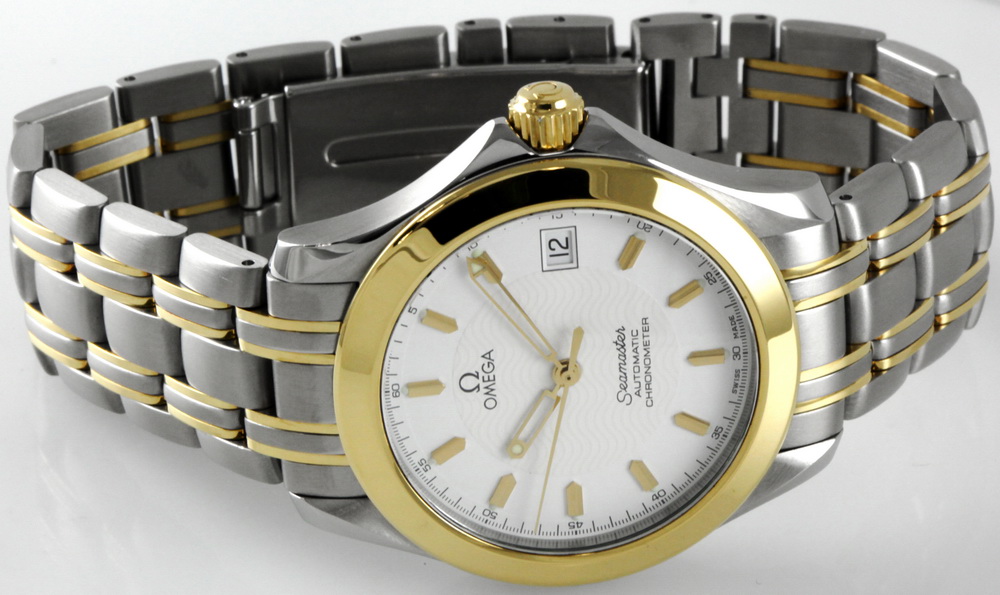 Omega introduced the Aqua Terra in 2003. All the models are water rated to 150 meters. Most Aqua Terra models are only produced for 1-5 years, a much shorter time span than the majority of Omega models. 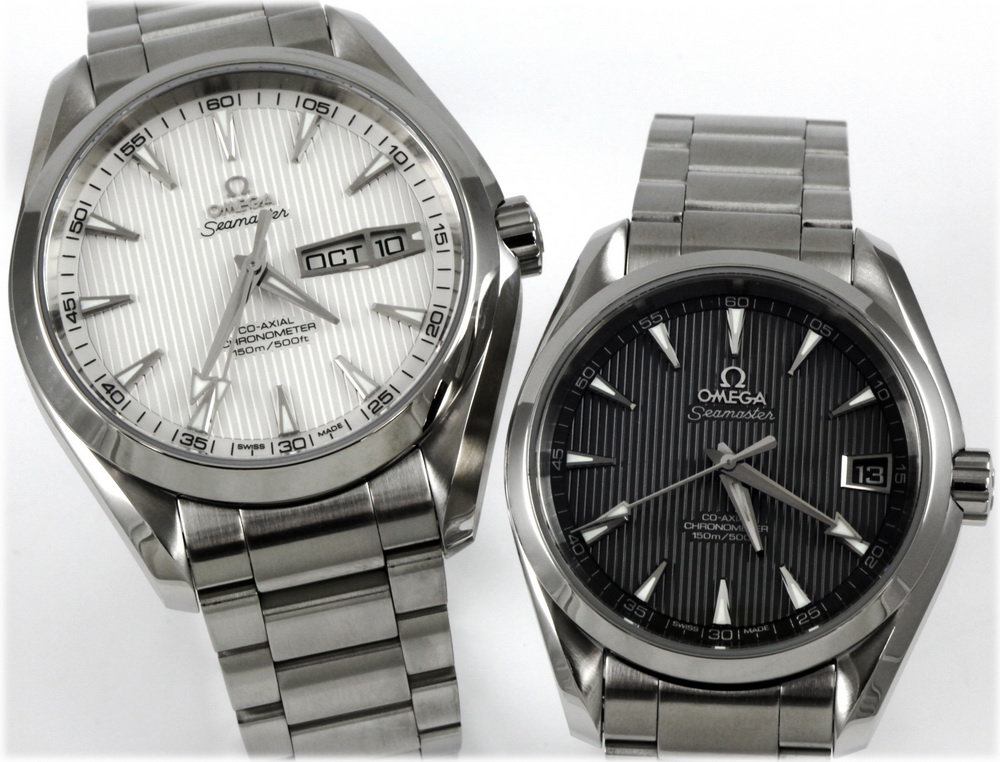 As mentioned, Omega likes to try new things with the Aqua Terra. To give an example of some of the variations, today you could go an Omega Boutique Store and find a regal 43mm Annual Calendar (which will keep track of the months, and move the date forward accordingly at the start of a new month), standard (date/time) co-axial versions in 41.5mm, 38.5mm, 34mm, and 30mm (38.mm and 30mm cases can be found with quartz movements), a huge 49.2mm Small Seconds, 44mm Chronograph, and 44mm Chronograph GMT (which is the most sporty Aqua Terra in existence in my opinion). 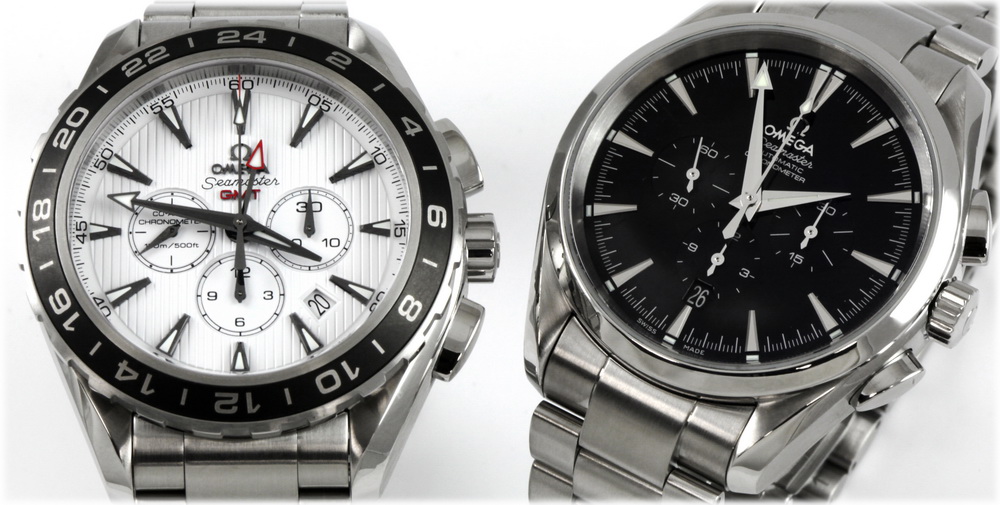 For the sake of the completionist, Omega also offers the Seamaster Proprof 1200m which is a massive 55mm x 48mm and a reincarnation of the 1970s Omega of the same name.

In the future, we plan to present the various product lines in more detail. Let us know if you have any questions on the Seamaster line and we would be more than happy to help! 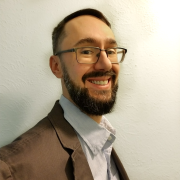