In 2011, Hamilton introduced two new chronograph movements dubbed the H-21 and H-31.  These movements are based on the extremely popular and well-loved ETA Valjoux 7750 and ETA 7753.  The Valjoux 7750 was introduced in 1974 and captures the essence of “economy of manufacture.” The movement itself sits at 7.9mm thick which helps to explain why most chronograph watches with the 7750 sit at 13mm to 17mm thick.   Thankfully most people who want a chronograph typically enjoy a larger watch.

It is well-known to people who follow Swiss watch industry news that the SWATCH Group has been focused on reducing the supply of ETA movements to companies outside their group, but these movements are still being supplied, and will continue to be supplied under certain agreements.  However, SWATCH is only under agreement to supply the movements that they have sold for years (decades).  This allows them to innovate and create cutting-edge movements exclusive to the SWATCH group, while their competition must rely on the standard (but clearly still a great workhorse) ETA ebauches or use a Sellita SW 500.

Watch firms with more capital can invest significant funds into researching & developing their own movements, or modifying an ETA or Sellita themselves.  SWATCH first announced they would phase down delivery of their movements way back in 2002.  Breitling and Panerai are two of the largest watch brands who traditionally used MANY ETA Valjoux movements and did not create any of their own movements.  They saw the writing on the wall and by the end of the decade they were selling watches with their own in-house movements.  These new manufacture movements do not come cheap, on average costing 4-6 times more than a Hamilton.

Below is a short promotional video Hamilton created which shows of the beauty of these new Hamilton movements.

With the introduction of the Hamilton H-21 and H-31 SWATCH has stepped up their game by providing two very significant improvements to the 40-year old movement.  Most obvious is the increased power reserve of 60 hours instead of 42 hours.  Hamilton achieved this increase power reserve by improving the main springs on the Valjoux.

For someone with a couple of favorite automatic watches they like to switch out, or maybe for the man who has a workweek watch and a weekend watch, this extra 18 hours running-time helps assure your watch will still be running when you pick it up again without the need of a watch winding box. 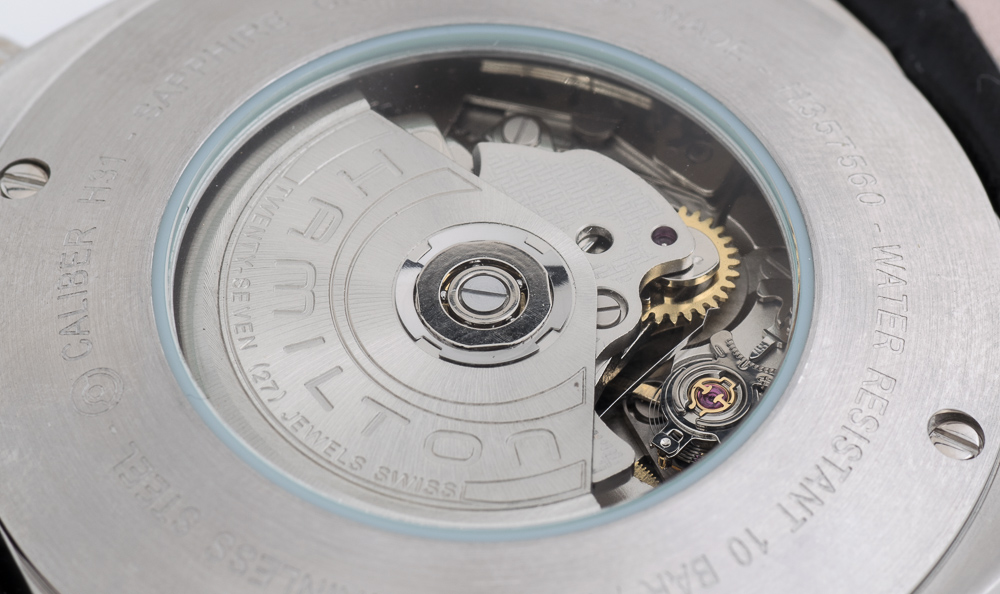 It is commonly known that a Swiss or Japanese quartz movement is more accurate than the most sophisticated of mechanical watches.  People who appreciate mechanical watches accept this.  That is not to say that we don’t care about accuracy!  At Hamilton’s “University” they simply state “The spiral has been glittered to increase accuracy and stability”.  I tried to do some research on what the process of “glittering” is, but my google-fu failed me.  We timed a couple of the new movements and found them to keep within COSC specifications (while not being a Chronometer certified watch).

There was an incorrect rumor at in the WatchUSeek Forums that these Hamilton movements had the Nivachoc shock-protection.  The Nivachoc is utilized in the signficantly nicer Omega 8500 and 9300 calibers.  The rumor was debunked, and originated due to the jewel caps being two opposed Ts like the shock absorber on the modern Omega Co-axial opposed to the violin shaped jewel caps on an Incabloc. 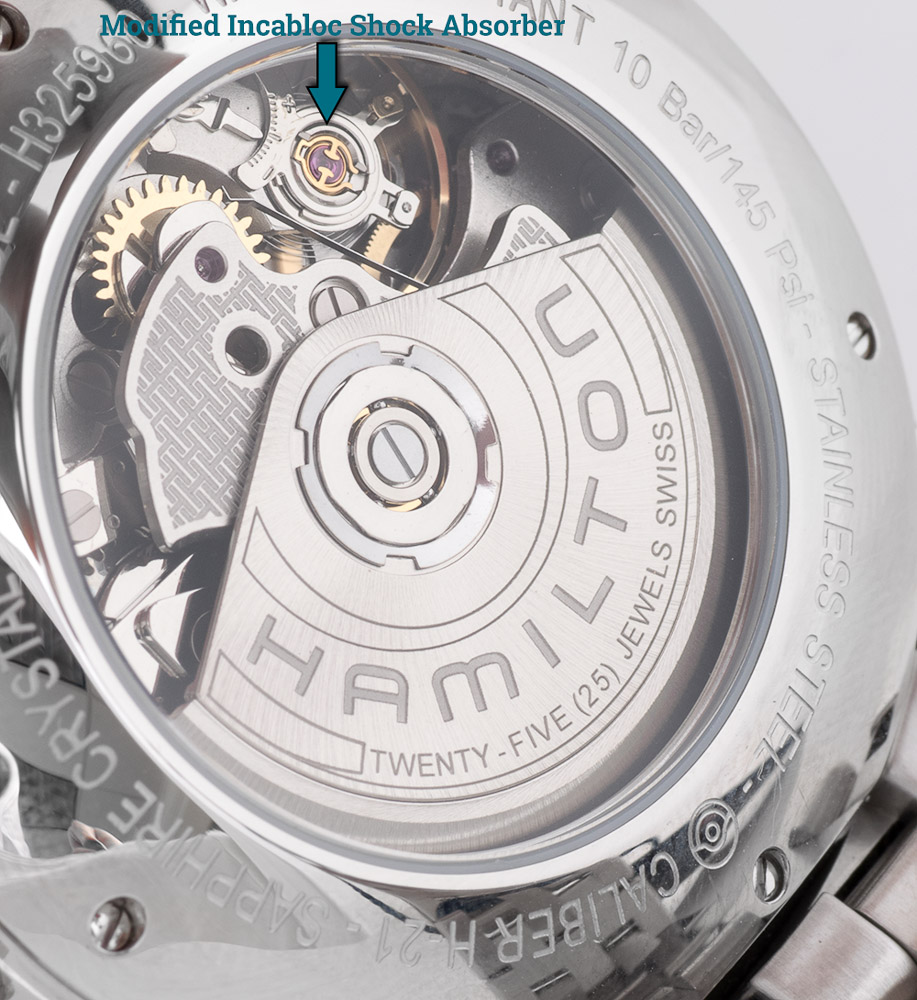 Hamilton watches already offered a great value for the budget-conscious watch collector, even before introducing these two significant improvements.  The extended power reserve and enhanced accuracy are just the cherries on top.  We are excited to offer a range of Hamilton watches for purchase.  We only have one of each model and we expect the selection to slim down quickly!

7 Comments on “SWATCH ETA Movements, Pushing Ahead With Hamilton H-21 and H-31”